And another iteration of bias lighting.

While it “works” – there’s various minor issues, and iterations of my bias lighting setup.  More brightness is always nice, and I’d like to combine the ability to power it off my PC, with a few additional features. I’d like to turn it off. I went with a cheap, commodity remote controlled relay – a MTDZ007. and setting it up so each monitor’s bias lighting can be controlled individually. 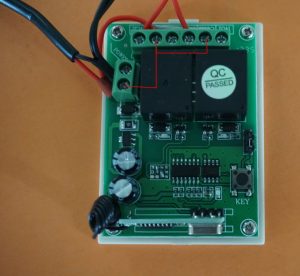 Basically there’s a standardish female barrel connector that shipped with my LED strip connected to the power input to the relay, on the left. The 6 terminals on top are 2 pairs of “NO, Common and NC” so you want to bridge the positive (or negative) power input to that. I chose to jumper the power input to one common connector, and connected a second jumper wire between the two common cables. All three of the other polarity (in my case, negative) are connected to the power input. The positive “leg” of a pair of JST style connectors connects to each NO terminal to complete the circuit. As such, I can now connect and disconnect the LED arrays for trouble shooting purposes (unlike the earlier soldered together setup).

The jumper header switches between momentary (say if you want to turn on a PC with a remote control), flip flop (presumably for forward reverse or lighting up one sign or another) or independant control.

For power input, I simply bought a molex to fan connector and connected it to a male screw on barrel terminal – I may convert something else, maybe a sata to something else cable in future, and this is neater than my current molex to hacked up floppy power cable set up.

as for the actual lights – I’m upgrading from a 3528 to 5050s for more brightness, and its straightforward otherwise. There’s *almost* no soldering required (unless you need to splice a longer cable to your JST style connectors) .