Until recently, I had a boring, run of the mill 1600×900 display. It worked well enough, it was a decent gaming monitor, and well, I didn’t really see anything that made me go wow.

I figured I’d go for one of the korean displays Jeff Atwood seemed so fond of eventually and maybe an inexpensive colour calibrator. Its one of those “I’ll do it eventually” things I never got around to doing. Between the bewildering array of choices, me being late to the party and missing them being *ultra* cheap (they were a bit more expensive, at around 400), it just didn’t happen.

What I did end up getting was a P2715Q. I paid somewhere north of 900 sgd (with sales tax, and a smaller discount than dell offers in the US) for it. Its a proper 4K display (with 60hz capability over DP/mDP), with an IPS panel 27″ (there’s a 24 inch version for somewhat less, but I figured that I didn’t want/need pixel density that badly. 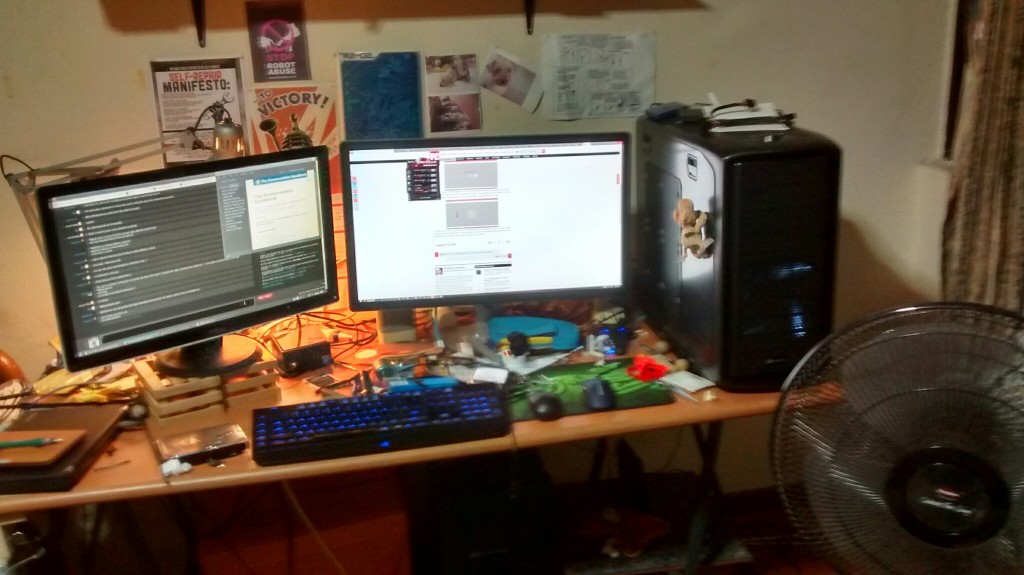 This display supports single stream transport (earlier displays used multi stream transport, and split up one panel into 2 streams since 4K requires a lot of pixel pushing, even at the display level) – this means it can hit 60hz as a single display, and 30hz if daisy chained to a second display through a specific display port connector. In my case, between the onboard graphics and the nvidia GTX 660 (which I’m planning on upgrading) I have plenty of ports. This is probably more useful if you want to run two of these off a laptop for some reason.

Out of the box, the display looks a bit yellow. *Do not adjust your set yet*. Both P series monitors are properly colour calibrated our of the box, and look glorious for most things. After a bit of getting used to, I tried to calibrate my old VE220T to be a bit better… and well, Its impossible to get it calibrated with the tools in windows. This, I didn’t need to adjust at all. I did turn down brightness to 50% (Most monitors, even nice ones come too bright out of the box. IPS tends to be brighter than run of the mill displays, and even with those, turning down brightness actually makes things better). After a few days, its a *quantum* leap from my old display.

Portswise, it comes with one mini displayport and one displayport connector, one HDMI/MHL connector (which would restrict you to 30 hz) and a second full sized DP connector for daisychaining. It also comes with one usb 3 input with 4 USB 3.0 ports. All except one of these is in a recess behind the screen with the video and power in. On one hand, this keeps wiring neat. On the other, it makes the USB ports hard to access for casual use – they’d probably be more useful for things you don’t plug and unplug often. There’s one port on the back that’s vaguely reachable, but its definately no replacement for a USB hub.

Industrial design wise, there’s many complaints that dell’s conservative. Their monitors do tilting, panning, height adjustment and rotation, and look the same as they did half a decade ago cause its pretty hard to improve on it. Even the thick bezels have a purpose – to hide nice tactile buttons. The only real complaints I have are the rear usb ports, but the older models with side usb ports were somewhat less thin.

Whoever designed this monitor was pretty serious about power use. y. Its got a little graph showing power usage. Its got a feature that *lets you turn off the power LED when its running* which I love to death.

My video card probably can’t handle 4k gaming. I’m running things at 2560×1440 for now and my GPU handles it fine.

So, for somewhat more than what you’d pay for a no name, A- grade korean display a few years ago, you can get a properly colour caliberated 4K display, with all the modern inputs.

It comes with an optional application that sits in your taskbar on windows and lets you set per application colour profiles (maybe useful), set brightness and contrast (which can be useful, but setting colours for custom mode would be nice), and snapping windows into up to 2×3 grids or custom grids, which can be shiny.

The good part? Its a *great* display with fewer compromises than the early generations. It does 60hz, 4K and is pretty usable out of the box for most folk

The bad? You’ll need a beefy video card to game on it, and 4K content is a little hard to find.

The ugly? Your old TN monitor. And my photography skills.

Update: Almost 4 months on… I discover that all the USB ports work when the monitor is on standby, which is handy. Not sure if I completely missed something that obvious, or something got updated (do monitors have firmware updates?) in the meanwhile.